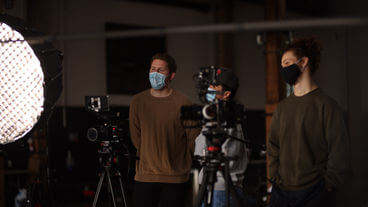 When people dream of their future careers in the film industry, many might imagine being a movie star, a famous writer or top-tier director. However, those aren’t the only jobs to be had. Whether you’re making an indie film or working on a big budget commercial, it takes a team of dozens (or more) to realize the final product.

Toronto is a bustling city full of excitement, adventure, and a wide variety of film production jobs. As a result, Toronto’s film industry is brimming with opportunities for you to put your diploma and experience to good use. The industry has all kinds of film jobs available, from special effects videographers to key grips to gaffers to editors to makeup artists and beyond.

We’re going to cover five video production jobs that may surprise you once you read what these film jobs entail and what skills they require.

What Jobs Are There in the Toronto Film Industry?

There are hundreds of Toronto jobs in film that can help you to start or continue your career. Browse these notable positions to see if they’re right for you:

The line producer’s job is to manage the physical execution of the production, whether it’s branded content or a movie, and make sure everything runs accordingly from start to finish. Their role is extensive, but some of their tasks include:

As far as film production jobs go, this one requires applicants to have a lot of experience under their belts. The more you work on sets will eventually help you to land this position. Being a line producer usually requires you to have worked as a production assistant up to production manager.

The coordinator’s main goal is to ensure the production’s plans are executed right and on time. This job is only required while the production is in progress, so it’s only available on a project-by-project basis.

A casting director assists the director in finding the right actors for the production’s roles. They will read the script and meet with various directors and producers to understand the type of people needed for each character.

The casting director must find talent while also keeping in mind the producers and directors’ demands, although the casting director is sometimes not given much direction. They must also keep in mind the actors’ availability, fees, and general interest their involvement in the production will create. They regularly attend various types of entertainment to find talent. Additionally, they organize rehearsals and negotiate with actors and their agents.

The camera operator takes direction from both the director of photography (DP) and the director of the production. The camera operator may work in tandem with the first and second assistant camera, as well as a Steadicam operator, to ensure the scenes are captured according to the DP and director’s plans. Depending on the production needs, the camera operator will use different pieces of technical equipment, from single portable cameras to remote-controlled cameras to mobile mountings. While you may think they only operate some sort of camera for their job, there are more tasks involved, such as:

Whether you’re working on commercials or corporate videos, being a camera operator can be a physically demanding role but a crucial one. Often, practical experience, technical skills, and a genuine love for camera work will help you land this type of position, although having a relevant degree won’t hurt your chances either.

A boom operator is part of the sound team and positioned next to the camera operator while holding a large microphone above the actors, so their audio is crisp and clear during every take. If you’re looking for work experience, the boom operator position is a great place to start since it will allow you to witness and participate in the ordered chaos of film production.

Unfortunately, this microphone sometimes makes an expected appearance on film, which is only ever shown in blooper reels. Some of the tasks the boom operator performs include:

While this is an entry-level job, having experience as a production assistant or sound trainee can increase your chances of being hired. This job position provides you with training in audio recording, leading you down the road to the role of production sound mixer.

Now the film jobs listed above are only a drop in the ocean of video production. Additionally, there are other jobs outside of the production stage for the pre and post-production stages.

How Do I Get a Job in a Production Company?

Getting a job in a production company can require an aggressive approach, since it’s such a competitive industry. You can start by submitting your resume with a demo reel, samples, credits, case studies, and any other examples of video productions you have worked on.

Contacting production companies that aren’t currently hiring can give you an edge since they won’t be bombarded with applications. In-person and phone conversations can leave a lasting impact and lead you to get an interview set up.

Applying to Minifridge Media can help you to break into the film industry. At the core of our services, we tell the stories of businesses in the Greater Toronto Area through high-quality content. Get in touch with us to join our team – who knows, you may be working on our next Toronto video production!